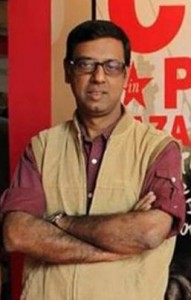 Kishalay Bhattacharjee worked for seventeen years at New Delhi Television (NDTV) as a Resident Editor. He reported on several conflicts during this time, including northeast India and Maoist corridor. He is currently the founder- director of the Reachout Foundation, which works to defy stereotypes, fight prejudice, and eliminate discrimination.

He was nominated by the Association of International Broadcasting AIB Awards, London for best current affairs programme, 2013. He received the Ramnath Goenka Award for Excellence in Journalism 2006 -2007 and the Videocon Award for Television Excellence in 1994. He was given the Panos Fellowship for HIV/AIDS, 2007, made the Edward Murrow Fellow for Journalism, in 2006.  In 2004 he received the Best Journalist Award, Assam and Meghalaya.
Kishalay has presented papers at Heildelberg University, Germany in 2013, the S. Rajaratnam School of International Studies, Singapore in 2011, Jamia Millia Islamia in 2011 and 2013 and University of Southern California in 2006. He was Chair of Internal Security and a Senior Fellow at the Institute for Defence Studies and Analyses (IDSA) in 2011. 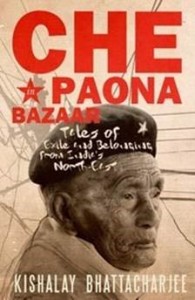 North-East India is not an ‘imagined community’, separated from the politics and policies that govern the rest of the country. It is as real as the violence that has torn the land apart, leaving its people grappling for a semblance of normalcy, if nothing else. The north-east isn’t just a hotbed for insurgency and deadly casual encounters, a stop-over on every international rock band’s schedule, or where used syringes lie waiting in dark alleys. There are other realities as well— of forbidden love, weddings, fascinating cuisines, childhood memories and other ‘unimportant stories’ that never made it to our newspapers and television screens.

In spite of gaining exclusive access to the region, former Resident Editor (NDTV, north-east), Kishalay Bhattacharjee struggled to broadcast stories of these multitudes. Years in the media have taught him that not all revolutions will be televised. Che in Paona Bazaar finds Bhattacharjee deep in the heart of Manipur, demystifying a state that was once just a source of ‘news’ for him. He delves into public memory, digging up collective histories to bring to life a people forgotten by their fellow-countrymen, of women hardened by constant hardship and of a youth struggling to merge their multiple identities. These tales are the result of a long and unflinching look into Manipur’s past and present – a land rich in tradition, culture and violence – and of a people who stage their own daily rebellion by living and thriving against all odds. (less)

EAST SIDE STORY
Review by Sukalp Sharma
I struggled to tell their stories. I really struggled to represent the voice of the people there because it would be one story in weeks. It was inadequate. So how do I design a book around it? I told myself that the book has to be in the voices of those people, not mine,” says Kishalay Bhattacharjee, author of Che in Paona Bazaar. As the former resident editor of NDTV in the North-East, Manipur and all its multitudes have been a part of Bhattacharjee’s professional and personal journeys. But as he laments, he struggled to broadcast the stories of these multitudes. “It’s a complex state, a complex society and one book won’t really suffice. Nevertheless, it was important. There has to be a start somewhere to appraise our people about their forgotten fellow citizens tucked away in India’s eastern limit,” Kishalay Bhattacharjee says. In a conversation with Sukalp Sharma, he decodes his book, the multi-layered problems of Manipur and its people, and other “‘unimportant stories’ that never made it to our newspapers and television screens”. Excerpts:
You’ve employed a non-linear fragmented narrative structure, and you chose to tell the story through a young female protagonist, Eshei. What made you adopt such a style?
There are hundreds of issues in Manipur. It is so multi-layered. So stylistically, I thought that if I use the language of randomness, it gives me a sense of disposition that exists there. It gives me a sense of exile because the sense of self-exile is very strong among Manipuris. But that sense of tradition is there, that sense of self-pride is there. What is the language of that self-exile? I thought it comes from light-hearted conversations sometimes. This girl, Eshei, is part-fictional, part-real. She’s not one girl, but a few of them woven into one. But all the characters here are real and all the conversations are real.

Other reviews of this book

Links to articles written by Kishalay

2. Blood on my Hands – Confessions of Staged Encounters

Please click on the shrunken image to view the full cover 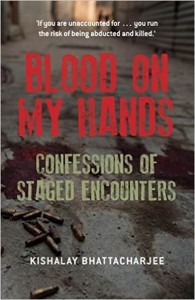