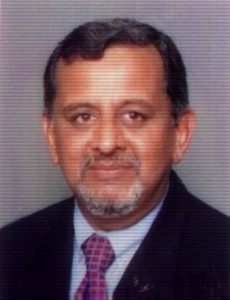 Born in Ooty, South India, in 1953, Krishna Rao went to St Edmund’s School in Shillong and studied medicine in Assam and Delhi. He obtained his postgraduate training in surgery and urology, spending several years in Malaysia and the United Kingdom. For the last 18 years he has practised as a surgeon and urologist in the city of Mysore. He is married to Sona, a practising Child Specialist, and they have two sons, Vikarna and Kabir.

His schooling, his fondness for English literature and his British sojourns have made him an unabashed Anglophile, a fact to which many of his friends would attest.

An aborted sabbatical to the UK in 2004 coincided with the media coverage regarding extraordinary rendition and prisoner abuse at Abu Ghraib. This provided the impetus for his maiden novel inspired by the thought that he himself might be the victim of such an eventuality.

He lives in Queensland, Australia, as far away as possible from the war on terror. 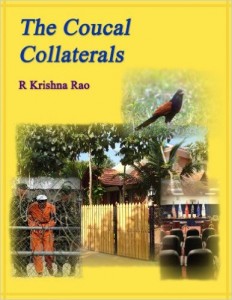 RAM and SHOBHANA are a doctor couple living in the small town of Mysore in South India. The high point of their lives is the romance of their serendipitous meeting, but since then they lead unremarkable, modestly distinguished lives, enriched somewhat by foreign travel in the pursuit of their respective careers. They bring up their two boys, practise their professions and for the most part are very happy.
Their circumstances change when they take on the task of building their dream home, an enterprise that rapidly swallows much of their savings. Ram decides to take up a locum position in the United Kingdom, where he has worked previously, to help with finances. He sets out in the summer of 2004.
All goes well with the appointment. Flushed with his success, Ram goes to Heathrow to take his flight home, when things go horribly wrong. He is mistaken for a top-ranking Al Qaeda terrorist travelling on false papers, and is handed over to the Americans, who fly him out to Iraq where he is confined in the notorious Abu Ghraib prison.
As the victim of what is euphemistically termed “rendition”, he is subjected to sleep and sensory deprivation and other forms of torture to induce him to confess to his crimes. His favourite bird, the COUCAL, a perennial visitor to his garden in Mysore and one that he has befriended, appears in his delirious dreams, playing a pivotal role in keeping him sane.
When he is sexually abused and eventually grievously wounded, only the timely intervention of CINDY, one of his erstwhile persecutors, leads to his rescue from the brink of death. He undergoes emergency surgery in Baghdad and is transferred to a hospital in the UK, where he survives a series of life-threatening complications. The price of survival is high, with Ram requiring further, complicated corrective operations to repair the after effects of his horrific injuries. His emotional scars are less amenable, but he decides to take on the system to obtain justice.
His subsequent legal battles in Britain and the United States of America end with mixed results, and he returns to India feeling defeated and suicidal, unable to go back to his profession or his way of life; collateral damage of a distant war.
Does Ram survive or succumb in the end? There is a final twist to this disturbingly plausible tale, illustrating the helplessness of the individual caught up in the quagmire of perpetual warfare.

Review in The Morning Bulletin

ROCKHAMPTON’S Krishna Rao loves the cut and thrust of his life as a surgeon, but it is his other love – that of books and words – that has led him to a sideline career as an author.

Dr Rao is about to launch his first novel, The Coucal Collaterals, in Rockhampton.

He started the project at his home in India in 2004 when he was about to leave for a sabbatical in the United Kingdom.

There was talk emerging about the CIA arresting people in foreign countries and sending them off to prisons, citing “extraordinary rendition”.

“It struck me that this was a power that could be abused,” Dr Rao said.

“I thought … I’m going to Heathrow Airport. What if something like that was to happen to me?”

Thus the seed had been planted. The first-time author sorted through the plot in his mind for a few months, bought his first laptop and set to work.

“I used to find time here and there to pen a few lines and then transcribe them and spend time crafting them,” he said. The main character is 50-something-year-old Indian surgeon Ram Sharma. This is no coincidence.

“It’s very autobiographical,” Dr Rao said. “Many of the characters are drawn from life.

“They say that your first book is often autobiographical … I’m a doctor who’s written a book, not a writer.”

While the character is very similar to his creator, the plot is a work of fiction. Dr Sharma is arrested at Heathrow Airport in London, when he is mistaken for a leader of a terrorist organisation.

He is taken to Abu Ghraib in Baghdad and is subjected to a lengthy period of torture while he pleads his innocence.

The title owes its name to the coucal – a large bird, common in India, and considered lucky.

“It’s such a shy thing, but in our area we had several of them. They are quite beautiful – not spectacular to look at, but handsome and regal, with confidence. I think they’re magnificent.”

In the book the coucal is like an alter ego to the main character … a voice of reason in his time of terror.

While the character Ram is happily married to his wife Shobhana in the novel, Dr Rao is devoted to his real-life wife Sona.

“I have to acknowledge the role of my wife Sona, who at times did not know if she was a character in the book,” he said.

“The other influence is of my old school, an Irish Christian Brothers College in India, which instilled a love of the English language,” Dr Rao said.

The well-respected surgeon has been in Rockhampton since 2007 and has a whole new set of acquaintances that had heard about his book. Hence the local launch.

The book was published by Writers’ Workshop India, which specialises in books in English by Indian authors, and supports first-time writers. The publisher has also printed works by best-selling author Vikram Seth ( A Suitable Boy).

Review in The Live Journal

By Hari the Kid

Saturday, the 3rd of May 2008 saw me attend my first ever book launch. With this book launch, I now know two published authors personally, one of them being my friend Vikarna’s dad – Dr.Krishna Rao who wrote the book whose launch I attended, and the other being a certain Aswath Venkataraman a.k.a Kodhi, who’s book launch I wasn’t invited to. Aswath is a cheap guy.

It was quite surprising that the book – The Coucal Collaterals, whose initial draft I had read almost three years ago was being released initially in Kannada, rather than the original language that it was written in, and due credit here has to go to Dr.Rao’s father, Shri K.K.R Rao, who diligently mastered the use of computers in general and word processing software in particular in order to get the hang of sitting and translating his son’s work into Kannada.

The book launch wasn’t a glitzy affair and it was more of an intimate thing which was attended by close friends of the author, but it was a nice experience overall, considering it is a fervent and quite open ambition of mine as well to be a published author someday.

Of course, getting stuff printed in magazines and on other websites doesn’t count because of the fund of sharing space, and as greedy and megalomaniacal as I am, I want my own book out some day, so that I can live off the royalties generated, sipping apple vodka martinis while lazing on a hammock in the shade in some nice place with not so much humidity, while dreaming about the next idea for a piece I have to write. Alternatively, I would love to scout around for a travel writer’s job, but that can be done only in due time.

Back to the book launch – it was a touching affair where a lot of things were highlighted almost simultaneously. The pride that a set of parents took in their son’s achievement of getting a serious and simultaneously entertaining book written, the love and respect a son had for his father who so painstakingly translated the book because he believed in his son’s work, the sheer emotional high that a published author ends up having whilst seeing his work bear fruition, not to mention the fact that my attempts to help get his book published had the author himself thank me no less than twice during the speech he made to the audience, making me go simply red, but also making me feel proud and happy at the same time, for having been an active part of the proceedings.

The after launch gathering where one got to partake on some Glen Fiddich single malt whiskey was also quite an entertaining affair, where my handy backpack’s contents were viewed with suspicion because I had produced a bottle opener, a pen and a notepad from it on demand. Of course, I also had other items including a Lonely Planet guide to Israel and the Palestinian territories, a digicam, an ‘I am Legend’ DVD, a bottle of water and some Tibetan lucky charm coins, but thankfully nobody really asked for that.

This post might not necessarily make too much sense to anyone who doesn’t really understand the context behind this narrative, but I figured out that it was an important occasion that required documentation nevertheless. It is seldom that I would venture to elucidate my specific emotions explicitly on a public forum, even though it might be my own personal space, but as I look back and read through this post, I figured I’ve let my guard down enough already.