Nilanjan Choudhury’s novel Shillong Times is a “story of friendship and fear” as the subtitle suggests. Friendship’s association with ‘fear’ then seems to be a thematic focus.

Set against the backdrop of Shillong in the volatile times of the 1980s, the novel is an addition to what is now turning out to be a fairly long list of fiction, including short stories which revolve around this town. Anjum Hasan’s Lunatic In My Head, Siddhartha Deb’s A Point of Return and Janice Pariat’s Boats On Land come readily to the mind.

Choudhury, however, builds a more conscious landscape of the town, than the others to take us to the world of his 14-year-old protagonist Debojit Dutta who in Blakeian terms leaves his ‘innocence’ behind to ‘experience’ his new found world, thanks to his friendship with two other teenagers Clint Eastwood Lyngdoh and the empathetic Audrey Pariat. It is the former who introduces Debojit Dutta, when they meet in mathematics tuition classes, to the world of Pink Floyd and the out of bounds restaurant Kalsang.

I mentioned the volatile times of the eighties against which the backdrop of the novel is set. Choudhury interfuses poignantly community relations (tribal and non tribal, the Bengali superiority syndrome, the Sylheti speaking Bengalis and the Calcutta Bengalis etc) with personal ones. Yet these personal friendships are among teenagers, which their adult counterparts or forebears seem to look askance at. Debojit’s mother reprimands him for this, so does his school teacher (lampooned effectively) Mr Chakravarty. Clint’s father refuses to help in getting the trading licence of Debojit’s father renewed, although he saves him in a potentially violent squabble.

As ethnic tensions rise in the town of Shillong, resulting also in conflict of relations between Debojit and Clint (thanks also to the meddlesome Mr Chakravarty), Debojit’s parents contemplate shifting to Calcutta and remove him to a school in Calcutta despite his protestations. Debojit also suffers taunts from his locality members for befriending a tribal, a Khasi. All this while the petite Audrey plays a quiet mediating role, playing across the broken friendship of Debojit and Clint and building bridges there.

At the end Debojit and his family leave Shillong for Calcutta, but not in any Forsterian sense, for Debojit stoically maintains his friendship with Clint, prismatically seen through the metaphor of the epistolary, writing a letter to him, and vowing to keep in touch with him.

Humour is mingled with pathos in a deflective manner to create a reality effect of pain, humour and love amidst racial animosity. All the three protagonists; the Khasi boy and girl and the Bengali boy are shown as muddled as they really do not comprehend such divides, which is perpetrated more by the world of adults.

Choudhury has set off these two worlds as point — counterpoint where one group consciously resists and rejects the world of friendship and camaraderie which the much younger characters uphold with some kind of an innate wisdom. This is the irony in the novel. Set against the times and also about it, Choudhury writes a brilliant, witty and at times with omniscient narration, a novel about transcending the times and, fostering a world of friendship and love.

Deeply evocative with a racy narrative “Shillong Times” is both contextual and textual; the sublime hypertext being an attempt to radicalize human relationships in the midst of such ethnic tension, prevailing in the small town. As curfew in the town disrupts the relationship between Clint and Debojit the latter gives a last ditch effort to save it, when against all odds he takes Audrey’s help to meet Clint, to plead with him to help save his father’s trading licence.

The novel is a neat inversion of reality, in fact a caricature of it. That, adults cease behaving like adults. This is a brilliant novel with a layered complexity of how human relations can be polarized consciously on ethnic lines, but how, more significantly the world of friendship and love acts as an antidote and nullifies barriers or divides based on artifice. This is the imagination of survival which Choudhury’s novel reflects, survival through the lenses of the imagination. Debojit is just about surviving in the city that he distrusts through his captive imagination of the town that he loves and knows only so well — Shillong.

Is this also a question of an authorial survival as the novelist spent much of his formative life in Shillong? The novel is a deft interweaving of fact and fiction, childhood fantasy, history (the partition of the country) and contemporary politics. But more significantly the ‘telling’ of the tale is superb where there is delightful fusion of style and content peppered of course with infantile humour.

Link to the source of the article: http://www.theshillongtimes.com/2018/10/21/friendship-fear-in-the-80s/?fbclid=IwAR3GjaQ3JEiWBeHaN6z2OZAzUfCbPR1du1JiUVukAqu-058rtzDrCs3ucEM

The Case of the Secretive Sister

Summary:
Bali and the Ocean of Milk 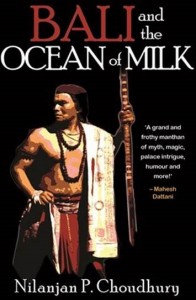 Interview with the author.

Nilanjan Choudhury  started writing because of the Bangalore traffic. “During the recession there was a lot of time on my hand and I was also travelling quite a bit. So I began writing the novel to entertain myself,” says Nilanjan, who launched his book at the Oxford bookstore in the Leela Galleria. He believes that everybody has a novel or a film in the making.

“I have always been interested in mythology. So I wrote one based on the famous story of the ‘sagar manthan’ or the story of the churning of the ocean for nectar. It is a story of enemies coming together and of unprincipled alliances that are common in politics. This book is inspired by satire and black comedy. Plus I wanted to talk about something serious in a flippant, light, frivolous way,” explains Nilanjan, citing Stanley Kubrick’s “Dr. Strangelove” and “Jaane Bhi Do Yaaro” as examples.

The book revolves around how the gods and the demons (asuras) of the ‘Hurriyan’ civilization come together to churn out nectar of immortality from the ocean, each for their own reasons and what happens after. They are aided by the holy trinity of the gods “Sambha, Jai and Viru”.

“It is a mythological thriller, with interplay of politics and the personal, magic and situational comedy thrown in. But it is important to keep in mind that I have used the story of the ‘sagar manthan’ as one uses a vase of flowers in the room, only for its fragrance and colours. My book is not a retelling, it is a different story about people and contemporary politics,” he points out.

For a debut author, Nilanjan did not have much difficulty in finding a publisher. The process took all of a month.

“The first publisher I went to rejected the manuscript. I then went to Harper Collins, who quickly accepted my book. The editor sent me a message saying she couldn’t put down the book. When I set out to write, I gave myself a commandment: Thou shall not bore. Maybe they liked it because it has a strong opening,” shrugs Nilanjan. The book opens with the apsara(nymph) Urvashi complaining about how she has a dismal sex-life with Indrah.

“I think the battle is lost or won in those first few chapters. Also I sought feedback from a lot of people and incorporated their changes. I believe that a product has to be of a certain quality before it is turned in. The book also had the endorsement of people like Mahesh Dattani, C.K.Meena and Abhijit Bhaduri.”

He feels it could also be because fantasy and mythology are genres of writing that are taking the world by storm.

“Publishers are now more accepting of fantasy because of its success in the West. It is amazing to see how writers like Rick Riordan have become billionaires. The whole genre seems to appeal strongly to swathes of global readers. Many people say mythology is vast and rich and it is a theme that has not been explored very much in English writing. People seem to like looking at familiar characters like Krishna and Rama in unfamiliar perspectives,” he observes.

Yet Nilanjan is not sure if he is going to write a second book.

“I’m an insecure writer, so it all depends on how the reader perceives my work. It has to give the readers joy and if I find that happening, I’ll write more. If I’m going to attempt another novel, I’d like to get my teeth into something contemporary, though there is a chance of getting back to mythology. But I’ll definitely keep the comedy element and make it a page-turner without being frivolous. Maybe the questions raised in the first book will be answered.