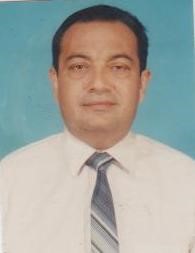 Raj Baruah, (aka Boijayanta Baruah), who is the well known Assamese  litterateur Dr. Birinchi Kumar Barua’s eldest son, did his schooling from the St. Edmunds School, Shillong and later graduated as a Marine Engineer from the Marine Engineering College, (DMET) Kolkata, in 1971. Thereafter, he joined the “Shipping Corporation of India Ltd.”Govt. of India, as a Junior Engineer and finally reached the rank of Chief Engineer, on board foreign flag ships, sailing worldwide.

He served as Deputy Director (Marine) & Ship Surveyor, with the “Inland Water Transport”, Govt. of Assam, from 1977 till 1979. Later in 1983, he started his own shipbuilding yard on the banks of the River Brahmaputra, named “Eastern Engineers Endowment Pvt. Ltd.”, where he built numerous river vessels. He was also involved in civil projects, having been engaged in the setting up of the “Numaligarh Refinery Limited” at Golaghat, Assam where he built numerous buildings, structures etc.

He is presently sailing as a Chief Engineer on board foreign flag ships on a contract basis for Emarat Maritime LLC, Dubai, UAE.

Recently, he has taken up writing, which has been his passion since childhood and is now in the process of releasing several books, of which “My Days at St. Edmund’s School” is his first publication.

My Days at St. Edmund’s School 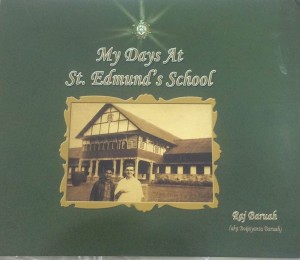 It is a nostalgic walk down memory lane reflecting the type of education and training which was imparted by the Irish Christian Brothers, to the students under their tutelage and care. This was a period when Shillong was the capital of undivided Assam, where the entire State’s administration, bureaucracy and politics were headquartered. Shillong was considered in those days as the central seat of learning in the entire North East with manny excellent schools and colleges established there, of which St. Edmund’s School was undoubtedly unique and a fore runner. This narrative is filled with innumerable memorabilia where the Author describes events with fondness and nostalgia. It also provides a brief insight into the origins of the Irish Christian Brothers (under the order of Edmund Ignatius Rice), who came to India in the middle of the 19th century for setting up schools, colleges and orphanages. There are numerous photographs and cartoons incorporated in the book, chronicling important episodes which have certainly added colour and humour to this publication.

It’s 2.30am…I just finished reading your book. It’s a masterpiece for the likes of us, the “Class of ’66”. My only regret was having missed out in all the action since I left school in ’65. I was invited and joined the farewell dinner though… since I was back in St. Edmund’s College as a Pre-University student residing in the New Hostel. It’s a treasure of a book that takes you down memory lane so vividly. I would give anything to re-live those wonderful days of youth even if it is for a moment. Well done buddy!

I just got a copy of your book in distant Pondicherry, through the unreserved help and kindness of Gangadharji. I have just read the extremely tender and touching Foreword by Brother Oman (who was the Principal when I joined the school in 1964 in Class 4A). Because coincidentally, the esteemed Author of this book happens to deal with the same time period (give or take a few years) that I was there, I relate to this book even more, than others say of the present generation. After reading the wonderful Foreword, I have decided to savour this book just one page a day. The book has been printed and published excellently, and is such a pleasure to hold. I am sure I will be benefited much, and some gaps in my education filled in, by rewinding to the past.

Yahoo, got it! That’s a great piece of work; worth every bit of the sweat (yours) & the dough (mine).

Albert Einstein had once said “Education is what remains after one has forgotten what one has learned in school.” And that has been my experience from my days at St. Edmund’s School. The school has been myguiding force in life and the education imparted to me from within its walls during the 60’s, still remains.

Many say that the school had peaked from the 50’s and reached its zenith in the late 60’s. Here I beg to differ. I contemplate that a school is to be viewed from a different perspective at different periods of its existence, since it is subjected to continual changes and upheavals as the years roll by. Hence, what was of paramount importance during my days in the 60’s may be of little or no significance in today’s scenario. Nevertheless, we received a great education from the Irish Christian Brothers of our times and since my narrative mainly deals with the days that I had spent in school in the 60’s, it should therefore be viewed by thereaders from the context of that particular period.

I have tried to depict as many incidents and anecdotes that I could recollect occurring during my days in school, but there is a possibility that certain episodes and accomplishments of persons have slipped my mind and therefore do not find a place in my narrative. I offer my sincerest apologies for the same.

I am indebted to Rev Bro’ R. B. Oman, my first Principal and Class Teacherin Class IX, for having consented to write the ‘Foreword’, which as Ramesh Bawri has remarked on Face Book is nothing but “a priceless painting, made of words, a joy to read…..!” I received assistance from RevBro’ M. B. Finn, for providing me a background on the Irish Brothers of our school, both living and dead, though actually I had little or no interaction in school with him earlier, since he had joined the school only in my final years.

I am thankful to Ranjit Chowdhury for editing this book and obliged to Opu Dutta Choudhury for furnishing me with the copies of ole’ school magazines, photographs and contact details of various people, with whom I have got in touch whilst writing this book. I am also grateful to other ex-Edmundians who have regularly followed my posts in the Seppa Forum on Face Book and have constantly egged me on to write a book about the school. In the meantime, at their behest a few chapters from this book have already been published in the Souvenirs for the Seppa Meets of 2013 and 2014. The cartoons are the imaginative handiwork of Pankaj Thapa and they have certainly added colour and humour to this publication.

The illustrations published in this book have been collected from various sources but are mainly from my private collection of photographs, taken in school nearly fifty years back. Hence in some cases the quality of printshas deteriorated with the passage of time, for which I crave the indulgence of the readers.

Finally, Theodore Roosevelt’s wit never fails to bring a smile upon my facewhen he explains in a jocular vein of the achievements that can possibly be attained when one has received a good education.

“A man who has never gone to school may steal from a freight car; but if he has a university education, he may steal the whole railroad!”