Born in Shillong in 1960, Ronmoy Das is a tax administrator with the Indian Revenue Service (IRS) presently holding the post of Principal Commissioner of Income Tax. He belongs to the 1975 batch of ISC from St. Edmund’s School. After obtaining a post-graduate degree in English from Delhi University in 1981, Ronmoy served as Lecturer in English at St. Edmund’s College, Shillong from 1981 till he joined the IRS in 1986. He has since served the Government of India in various capacities at Delhi, Guwahati, Shillong, Kolkata, Bangalore and Pondicherry.

In 2007 Ronmoy enrolled at the Indian Institute of Management, Bangalore (IIMB) to pursue a Post Graduate Programme in Public Policy and Management (PGPPM), which he successfully completed in 2009. The book is based on extensive research conducted at IIMB, in the records and archives of the Income Tax Department, and at the Maxwell School of Governance at Syracuse, New York.

The theses advanced in the book rely on his long and extensive experience as a direct tax administrator, and his varied field exposure lends to the work a practical and workable approach which sets it apart from generalized and theoretical approaches to the subjects of tax risk analysis and reform.

Apart from research, Ronmoy’s other interests include travel, golf, tennis, yoga and homoeopathy, in which discipline he is a Registered Medical Practitioner.

Ronmoy can be reached at his email address

Tax risk management has become a critical focus area in the modern economy, as countries increasingly realize the necessity of maintaining a state of comparative tax advantage 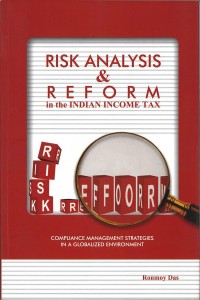 in a globally integrated financial environment. International capital investment is sensitive to the effects of tax laws upon net returns from projects in foreign countries, thus creating “tax competition” among nations which seek such inflows. Countries have today become acutely aware of the growing linkage between their tax policies and the process of globalization of their economies.

Several public policy issues arise in the realm of efficient tax risk management. The interplay of continuous demand-side and supply-side dynamics between the principal stakeholders, the revenue authority and the taxpayer, creates critical gaps between their mutual expectations. Tax risk management strategies adopted by both camps are conditioned by their respective compulsions, which are often diametrically opposed to each other. The revenue authority faces the primary risk of non-compliance with its laws, whereas the taxpayer faces the risks of additional costs, enforcement and prosecution. Thus, pursuance of evasion on the part of the tax-gatherer is equally matched by ingenious mitigation strategies by the taxpayer.

Starting with a theoretical and international experience perspective, the author attempts to identify some crucial elements and dynamics of tax risk analysis processes adopted in India. Risk initiatives taken by the Indian Income Tax Department (ITD) in recent years are analyzed to pinpoint areas where more focus is called for. A policy tool (TCPM) is suggested for continuous measurement of compliance, in order to enable ITD to achieve comprehensive risk profiling of each taxpayer. Alongside, the author has also devised a matrix (TRAM) to elicit regular feedback on tax policy which will enable the ITD to accurately identify areas where policy interventions are called for. The litigation risk policy of the ITD is also reviewed in the context of practical approaches adopted by the IRS of USA, and certain recommendations are advanced.

1 . Risk Analysis and Reform in the Indian Income Tax

Rising Need for Compliance Management Initiatives 21
Why Governments Need to Assess and Manage Tax Risks 26
Major Types of Tax Risk and Implications for Business & Government 27
The Pervasive Role of Uncertainty in fostering Tax Risk Analysis 28
The Allingham-Sandmo Model and its Variations 30
Tax Risk Management – Elements and Stakeholder Analysis 34
Types of Tax Risks: for the Taxpayer and the Government 37
The Influence of Externalities on Risk Assessments 42

Chapter 3
RISK MANAGEMENT BY TAX ADMINISTRATIONS AROUND THE WORLD: A COMPARATIVE STUDY pp.45-62

Chapter 4
THE INDIAN CONTEXT: ELEMENTS AND DYNAMICS OF TAX RISK ANALYSIS IN INDIA 63-106

Litigation as a Tax Risk: Uncertainty in Interpretation of Statutes 109
The Role of Trust: the Fiduciary Character of Tax Relationships 111
Determining the Materiality of Risks 112
US IRS Appeal Approaches and Policies and Those of the ITD 113
“Proportionality” and “Materiality”: the OECD Approach 126
Some Policy Pointers for India 128