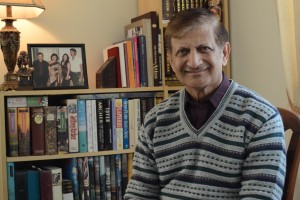 Dr Utpal Kataky spent his childhood in Shillong and still gets nostalgic about St. Edmund’s School. He attained his medical degree from Assam Medical College, Dibrugarh, and went on to U.K. for higher studies. After working in England and Scotland for a few years, he moved to Dubai where he worked in the government hospital as a pediatrician. Presently, he is the school doctor at GEMS Modern Academy and lives with his wife, two children, two dogs and a cat.

‘Distant Destinations’ is the amalgamation of two of his pet passions – travel and writing.

Travelogue covering forty years of travel to different places across the world.

Back cover: About Author with author’s photo.

Wanderlust is a wonderful thing and those who can take a plane to Singapore or a slow boat to China are indeed lucky.

Not many of us traverse the globe and are able to so eloquently share our experiences of the places we have visited, the incredible experiences we have had and the peoples we have met and befriended. Even though the customs are different, the food exotic, the language alien, there is a commonality of values that contributes to the concept of the global village. Scratch us all and we bleed red and are pretty much the same.

Utpal’s travelogue, a happy mix of Lonely Planet and see what I saw, is an invitation on several such voyages of discovery. You do get the feel that whether you are in the Forbidden City or absorbing the aura of the Northern Lights, reliving the Roman empire’s glory or seeking a moment’s refuge in the Caves of Carlsbad, he does give you a 3D effect and the impact is lasting.

This paediatrician by profession has compiled forty years of travel into easy to read segments. The style has a loping quality to it and will endear itself to every type of reader. It has to be said that Utpal is no stranger to writing. Even as he pursued his medical profession this quietly confident and erudite individual has displayed an affection to express himself in words. His impressive publishing record in various newspapers and magazines has stood him in good stead as he has taken up the task of taking us on a happy ride around the globe. With a sharp eye for detail and a certain insight for the unusual each trip is tuned into a pleasant tour de force replete with suggestions, even the mild critique that can help the future travellers so that story per se turns into a guide and entertainer as well as an education.

We are all agreed that travel writing is both an art and a science. It is a genre that has gathered strength as the world has shrunk and time is no longer of the essence. The difference really is that it is totally subjective. There is no template, therefore, and one can be enamoured by or reject a place purely by personal experience. This is why travel writing’s honesty is paramount and has to rise above the ‘how I was treated’ limitations that many writers err in following.

Utpal eschews that tendency and his personal assessments are unbiased and predicated to a general commentary rather than a critique or a harangue.While an element of hard fact does become mandatory, travel writing has to come alive and cannot confine itself to mere geography. Utpal’s book successfully bridges that chasm and allows the reader the luxury of getting involved in the narrative.There is a sense of intimacy that goes beyond the view from a 5 star hotel or the glisten of the picture postcard. Here is a travel series that walks the path, takes in the smells, understands the history and establishes that vital rapport between the culture and the traditions of various nations and the person turning these pages.

If there is anything that one could express a certain regret it is that there are not more places and people in the book to commune with. Perhaps a fitting answer would be to reserve a seat on the next flight out and create the first chapter of the sequel.