Holy Smoke! As the Edmundian school centenary is upon us, I just realized that this greybeard, yours truly, is really getting old. 63 years since I entered the hallways of St. Edmund’s and 55 years since I left school. Whoa! How on earth did the time pass? How do I still have so many vivid memories of those wonderful days? That’s because they were wonderful and memorable days that shaped my character.

It was in April 1952 when my father decided that I should join my two older brothers in St. Edmunds after a one year stint at the Loreto Convent. I was placed in Standard I under the care of the lovely Miss Hill and before I could find my feet, the First Term exams were upon us. I did miserably, coming in second last and it was only my tears and Miss Hill’s good heart that prevented me from being shuttled down to Upper KG. I did turn the corner subsequently and moved up the ranks and fortunately never had a problem achieving decent grades during the rest of my days in school.

My earliest memory of Standard I was sharing a desk with the person who was to become my best friend throughout school, college and even after I left Shillong to pursue my ambitions elsewhere. Serajul Alam aka Aloo was the youngest son of the Abdul Ghafoor family that owned that wonderful shop and pharmacy in Police Bazaar overlooking the Police Point. Today, the Centrepoint Hotel maintains a commanding presence on that very spot.
Aloo was lush with all sorts of goodies like Milky Way and Mars chocolates and bags full of Bulls Eye and other sweets, in addition to a never ending supply of oranges, pears, plums and bananas. All these were stored in the desk we shared. During class when Miss Hill had her back turned, up would go the desk lid, two mouths munching, munching, munching, heads down as we chewed down the remnants before Miss Hill turned around.

The only problem was that we never emptied out the peels, skins and wrappers from the desk. One day Miss Hill noticed a strange odor emanating from around us. She followed her nose. Stopped at our desk. Dramatically she lifted the lid of our desk and saw the mayhem within. The look of horror on her face was unbelievable. “How dare you do this in my class?”

Did we cop it!! After a severe tongue lashing as Aloo and I stood shaking in our shorts and Bata “naughty boy shoes”, our punishment was to stand on little wobbly stools in the front of the class repeating over and over again that we would never do “something” – I’ve forgotten what we were told to repeat.

Standard IV was a lot of fun as we were introduced to our first Brother, Bro. Kelly who had a unique style of teaching us our tables. His method was a rapid fire and out of the blue questioning of us at random on answers to questions like 9 8’s are, 12 7’s are and so on.
Kept us on our toes. Not Bro. Kelly. Only his questions.

One of the most interesting things about Bro. Kelly was that half the index finger of one of his hands was missing. It had been amputated because a fish hook got embedded in it when he was a young lad. This led him to speak about the unique construction of the barbs at the end of the fish hooks that prevent them from slipping out of a fish’s mouth. I have never forgotten that mental picture.

Coincidentally, I encountered Bro. Kelly many years later when I was in college and he joined “Shelley’s” Calculus class as a student and sat next to me. The roles were reversed. I was thrilled to show him how to solve some of the Integral Calculus problems.

Bro. Coffey in Standard V was a very nice person and my one run in with him was while I was standing with my pals outside the class and we saw a new Brother walking by. I got a good laugh from my buddies when I piped up that he was Bro. Cocoa, Coffey’s brother.
Well, Bro. Coffey was standing just behind me. You guessed the result: he tweaked my ear, pulled me into the classroom, lifted me up and spun me around over his head. When I was airborne the picture that came to my mind was Dara Singh twirling his opponents with his Aeroplane Spin. Needless to say I almost crapped in my pants, but learned my lesson. No, not to crap in my pants but not to be cheeky.

Standard VI was with Bro. Max Cooney who people will remember as having the physique of a prize fighter. Brilliant mathematics teacher! Corporal punishment was the norm in those days and Bro. Cooney had no qualms in applying this to discipline the rowdies in the class. He did walk into class one day when there was total turmoil and was so enraged that he screamed at one of his “pet hates” who ironically was sitting quietly, and took his thick foolscap exercise book and ripped it in two before “dhupping” him.

Bro. Donnelly in Standards VII and VIII was an excellent teacher and introduced us to Shakespeare and Dickens and the finer aspects of English Literature.

One incident that comes to mind during this period, was when I fell down walking to school and badly grazed the palm of my left hand. I washed it at the taps near the “bogs”, wrapped a hanky around my hand and scurried down the corridor towards my classroom. Who should I run into but our Principal, Bro. McPhilemy.

After a quick “Sorry sir”, I turned to scoot off when he noticed my hand and asked me what had happened.
I said “I fell down on the road on my way to school today morning”.
“Today morning? Today morning? Who taught you that?”
Instead of having sympathy for me and my poor hand, I was being given an open air lecture.

Less said the better about the most intense verbal lambasting for saying “today morning” instead of “this morning”.
He then sent me off to Sister Victoria to get my hand bandaged, not before warning me that if I said “today morning “ again, I would be in serious trouble.
Have never said “today morning” again.
This lesson has given me a stick to beat up on one of my Edmundian school mates who uses “today morning” frequently and continues to do so just to irritate me.

Forgive me for digressing, but I have to share a related incident with you:

I was recently on a guided tour of California’s Gold Coast and among all the other Americans, in our group, there were also two Irish couples from Dublin, Ireland. When I was introduced to them, I mentioned that I have a unique relationship with the Irish people, which immediately intrigued them. I shared my experiences growing up under the care of the Irish Christian Brothers in a small town in the hills of east India and they were really surprised.
When I told them my “Today morning” story, they roared with laughter and when one of them asked the waitress “Can I have a glass of Chardonnay?” I muttered “You can, but you May not”. That brought the house down! Subsequently they kept referring to me as their Christian Brother. They had everyone else chuckling when we sat down for dinner and before anyone would start, one of my Irish pals would suddenly yell “Stop! Our Irish Christian Brother has to say Grace”.

One evening, sitting at a bar in a Santa Barbara hotel, I seriously asked my Irish friends what they thought was the real reason I loved the Christian Brothers. They made some wild guesses and I then whispered something to the bartender, who smiled and produced a bottle of Christian Brothers Brandy! The ensuing peals of laughter had everyone in the tour group wondering what the crazy Irishmen and women and one Indian were up to, and wishing that they too were a part of the fun and frolic.

Standard IX, Senior Cambridge brought us a new teacher, Brother Brown, and new adventures.
Our classroom was in a unique setting above the porch where the library was also housed and overlooked the study hall.

One of the most important things that I learned from Bro. Brown was applying common sense in solving day to day problems. “Use your gumption, man” was his exhortation to us. This commonsense approach has stayed with me all my life.

My friends who were in the first row of the class had a tough time thanks to Bro. Brown’s Alsatian, Tiger, who had a flatulence problem. I can never forget Bro. Brown leading the class in prayer….”Our Father who art in Heaven, Tiger behave yourself, hallowed be thy name, Tiger stop it!” How could one keep a straight face?

An incident that I cannot forget was when I submitted my homework, which was an essay. I was called up to the front of class and got a tongue lashing for my untidy work and sloppy handwriting. I guess I got cheeky and that resulted in some corporal punishment and my being sent to Miss Pinto’s class to ask for a Cursive handwriting book so that I could get back to basics. I sheepishly landed up in Miss Pinto’s classroom and feigned ignorance as to why Bro. Brown wanted that exercise book. Miss Pinto took one look at the five finger impression on my then rosy cheeks and was too smart not to know what was going on.

Another hilarious incident that took place was when one of our classmates was asked to describe an episode from the book “Tobias and the Angel”’ involving the angel, Raphael, a guy called Tobias and his camel, Pultu. My friend, very nervous about being called upon, said “The angel Raphael was sitting on the river bank and Tobias came out from Pultu’s backside”. That had the whole classroom, including Bro. Brown, in fits of laughter.

As the year came to a close, the thought of leaving school forever was exhilarating, while at the same time saddening as I knew I would never see many of my friends and teachers again.

Thinking back at my years at St. Edmund’s I would hazard a guess that I had an unique and rare experience not shared by a majority of Edmundians. As you will recall we had three divisions in school – Juniors, Middles and Seniors. Well, I started school as a Junior, got to Middles and stayed there! I finished my Senior Cambridge without ever being in the Seniors division, since I was just 4 ft. 11 in. in height and a lightweight too. Who else can “brag” about that accomplishment?

Talking about my height, I remember the taunts I received when I landed up in college in 2nd year Intermediate Science (I.Sc) a few months after leaving school. One persistent question posed to me was whether I had lost my way, since School was in the other direction!

This brings me to the important point that an Edmundian never loses his way. As I reflect on my personal and professional life over the last 55 years since I left school, I have an overwhelming feeling of gratitude towards the Irish Christian Brothers who selflessly imparted not only an excellent education but a value system that really made me a far better person than I could have ever been.

Just two words to them— THANK YOU. 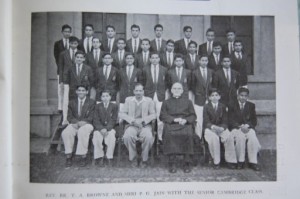