Thanksgiving is special for me this year(2013). In late September I learnt that one of the teachers who had a deep influence on me, and with whom I had lost touch, Brother Michael D. Curran, was alive, was 94 years old and had completed 78 years as a Christian Brother.

Bro Curran was part of the faculty at St Edmund’s, Shillong, north east India. He directed the operas and plays staged by the school, taught the flute, lectured on literature, and had an amazing singer’s voice. He was also a good soccer player and golfer. His method of imparting knowledge could not be described as mere teaching; it was as if he was passing on his love for the arts and sports to his students. We felt that we were being gifted a passion. The amazing thing was that the more he gave the more he seemed to have in reserve.

How did I re-discover him? An alumni of St Edmund’s, Victor Banerjee, who acts in Hollywood and Bollywood movies and has won awards, including one for his performance in A Passage to India, visited Bro. Curran in St. Patrick’s Home in Baldoyle, on the outskirts of Dublin. Victor and his wife Maya gave Bro. Curran a silver ring from the Loretto Chapel in Santa Fe with “Hail Mary” engraved on it along with flowers, two boxes of chocolates and Bailey’s Irish Cream. Victor gave these on behalf of all “ the students whose lives Bro. Curran had touched in numerous ways.”

Another alumni posted Victor’s report on Facebook in September. At last count over 230 “comments, “by ex-Edmundians from different parts of the world, had been added to Victor’s thread. 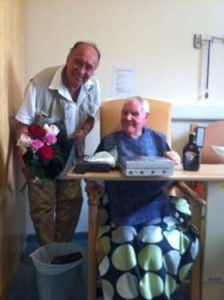 “The truth is, I revere Bro. Curran for the values he instilled in me. Acting and singing are superficial manifestations of what he brought out in me,” Victor’s wrote to me, when I asked him for Bro. Curran’s address. Victor’s words could be described as a fairly representative paraphrase of the 230-plus “comments” on Facebook.

This Thanksgiving I recall with gratitude Bro. Curran’s gifts to me. I was interested in writing. But whatever I wrote turned out to be prolix. Time and again I took this concern to Bro. Curran. He would smile and tell me that I should not worry too much. He assured me that my language would gain sinew and muscle as I grew older. It was hard to believe in such a simple solution. But time proved Bro Curran right.

Bro. Curran also gave me the freedom, on two occasions, to write plays for the St. Edmund’s stage and direct them. Of course, he kept an eye on the proceedings from the wings.

In effect what he did was to lead me gently to build confidence in my abilities. How else could I make a risky career change at the age of 40? I had no hesitation in giving up the relaxed pace of life that Shillong afforded, a comfortable position as a college teacher, the steady income from a book store, and the leisure of bringing out a book every few years. I moved with a wife, an eleven year old son and a seven year daughter to start an export company without any knowledge of international trade. I substituted my stable life style with a running-to-stay-on-the-same-spot position in Taiwan. Since Bro. Curran had taught me to think, not simply to amass knowledge, I learnt on the job. This habit of mind also helped me to adapt to an unfamiliar environment, to Chinese culture and a unique, local manner of negotiating.

As a parent, I was concerned about the influences on the young minds of my children in the open societies of the developing/developed worlds. I was particularly afraid of the attraction of drugs. I decided to think as I imagined Bro. Curran would have reasoned. I taught my children to respect their bodies and got them to participate in sports. I’m fortunate that the solution worked. Both my children have grown up to be responsible adults.

I hope my son and daughter pass on this approach to their children. I can then say Bro. Curran lives on through me. A priceless gift to remember on Thanksgiving Day.