Reminiscences from my Years at St Edmund’s

I joined St Edmund’s in 1955 and was in Mrs Quarman’s Upper KG (B) class. My previous two years were spent in Loreto Convent but, sad to say, I have no memory of those days at all. Coming to St Edmund’s was a big thing for me – that’s where the big boys went – but I was quite overwhelmed by the newness and unfamiliarity of it all. Fortunately I had my cousin Pervez in the same class as me, so at least there was someone I could hang out with.  Also another cousin Akbar Saleem, a few years our senior and a bit of a pugilist, was around to turn to, in case anyone picked on us. No one did.

Early memories are a bit hazy, but I was in love with our class teacher in Std 1A – Miss Ira Goldsmith.  I must have been all of 7 years old and three feet tall! She must have liked me too because I got 2 Gold cards in her class! But I think her favourite was Sarwar Mohammed – he always got a Gold card. Here is our class picture in 1956 (I’m 6th from left front row): 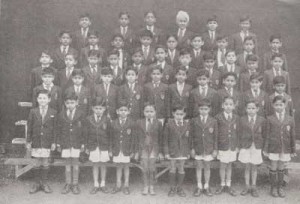 Our class teacher in Std II A was Miss Pinto and as if we hadn’t had enough punishment for one year, she was our class teacher again when we were in Std IIIA! Miss Pinto was strict as creases and very moody. We didn’t know from one day to another which Miss Pinto we were dealing with! Her favourite punishment – we had to hold out the palm of our hand and she would whack it with the thin side of her ruler. That hurt, but we were boys, so apart from the occasional loud “Ouch” and “Sorry  miss” we would never cry. Here is a class picture of Std III A in 1958 – a number of familiar faces here. Do you recognise any (I’m 2nd from left, front row)? 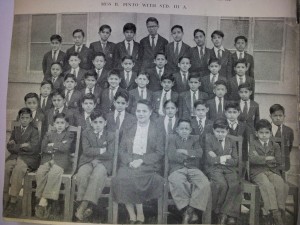 The next two years are hazy. I remember Bros McCann, Foley and Oman teaching us in Classes 6 & 7 (Std IV A & Std V A).  Our house in Lower New Colony was a fair distance away from school and I had to walk up a steep hill and walk miles (it seemed at the time) – took all of 30 minutes to get to school. Routine was to leave home at around 8am, got to school at 8:30 am – dumped school bag & books in the class room and rush to the open ground next to the Air Wing offices to play marbles. This is where most of the day scholars gathered to play our version of marbles and compare our iron “doms” and “taws” – remember them! Then as the 9am class bell went we would rush to our class rooms, pockets jangling with marbles, hoping to get to our class & store our marbles before our class teacher appeared (otherwise they were likely to be confiscated).

Lunch in the round summer house – our servant brought me a tiffin box from home and then either a walk with friends (usually Pervez, Ifzal Ali & Jas Butalia) around the top field, solving school, class & world problems or just watching kites flying low and grabbing a sandwich from an unsuspecting school boy. There was always marbles again.

Classes finished at 3pm then rush home, change, grab some milk & bread and back to school for games – hockey or football and back home to wash & do our home work. Except Wednesdays when there was a movie in the school hall – usually a Western with Bro Cooney, who was the techie in school – in charge of the projector, with his huge hands in front of the projector whenever there was a kissing scene, much to the dismay of our lot, accompanied by wolf whistles & groans!

Here is a picture of us youngsters around 1959, going for a class picnic I think. There is a very serious looking Bro Foley in the background. A more ragamuffin bunch you ever laid your eyes on: 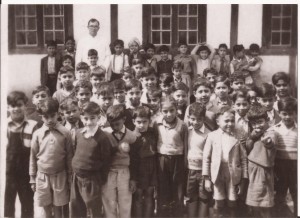 My next memory was when we were in Std VI A with Bro Browne (and yes his smelly Alsatian – Tiger).  He was a very strong person, and we had to be very careful not to upset him. He was a stickler for discipline and one had to be word perfect for the first four Geometry Theorems. I remember the occasion when Sandy Lewis did not get his words right for the 4th Theorem. Bro Browne called him up and then proceeded to slap him, left hand, right hand over and over again into Sandy’s face until Sandy’s face was as red as a tomato. Apart from the thudding of the palm hitting the cheek, there was a pin drop silence. That was a most unpleasant incident and would have led to a criminal case had it happened today.  Most of the time, however, school life was fun as long as you followed the rules and did not seek out trouble. Here is our class picture for that year. 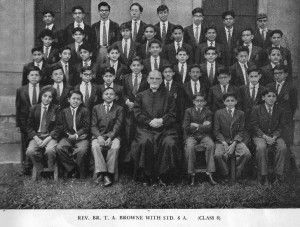 In 1962, I was in Class 9 A (Std VII in old money), and we were in Bro Looram’s class. A year I’d like to forget as Bro Looram was a big bully and being the smallest in the class, I was often the one bullied. I remember that on a number of occasions, if I didn’t get the answer he wanted, he would pick me up from the lapel of my collar and rub my nose on the blackboard! I felt very humiliated and upset and hated class.  My grades suffered and I barely scraped through to Class 10. This was Bro Judge’s class and despite him being a wonderful teacher, my grades were still so poor that it was felt that I should repeat Class 10 again. And so it was that in 1964, I was still in Class 10, this time with Bro Corbett, while my other class mates were finishing school. That was a low point in my schooling, but made me determined to do the best I could from then on.

Fast forward to 1965, the year of St Edmund’s Golden Jubilee. I was in my final year in Class 11 (ISC) – the senior most class. Our class was above the front entrance of the school, with a great view of the countryside and the summer house. Our teacher was Bro J. B Corbett and he certainly had his work cut out for him. Not because we were an unruly class or anything like that, but being the Golden Jubilee there were a lot of distractions. There were the celebrations to organise – sports, plays, socials – yes socials when girls from Loreto were allowed into school and we had dances in the main hall. That was the first and it started a trend for the following years. Not all the Christian Brothers approved, but Bro R. B. Oman was our (youthful) principal then and he was very forward thinking.  Here are a few pictures – our class picture, a picture with Bros Judge/Corbett, “Social” picture, Boarders’ picnic to Barapani, O’Leary House & Class XI Football teams: 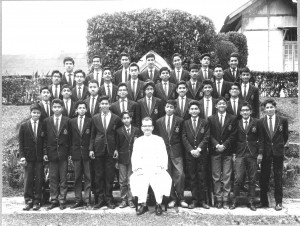 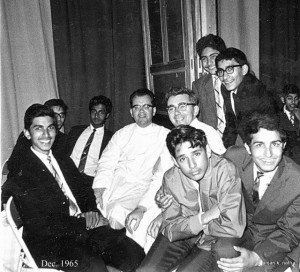 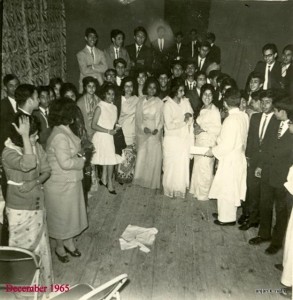 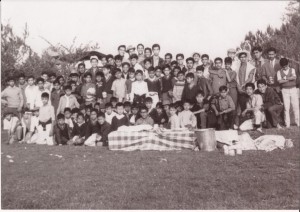 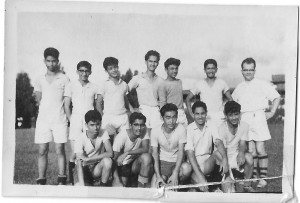 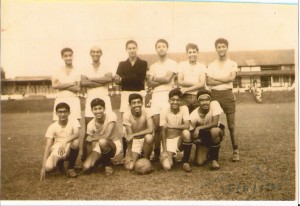 I was able to put the disappointment of repeating a year behind me and came second in class in our ISC exams that year – that Ronojoy Dutta pipping me by one point! That was a highlight of my schooling and I was able to see the pride in my parents’ (who had always been so supportive) eyes for this achievement.

Finally, it is difficult to put into words those formative years when I grew up from a child into a boy and then an adolescent young man. There were a few unhappy times, sure – but overall I feel blessed that I went to St Edmund’s and was taught not only the subjects in our curriculum, but about values, friendships, character and how to treat everyone as an individual, irrespective of their social background, region they came from or what religion they practised.

I feel I owe St Edmund’s and our teachers a lot – as it provided me with the foundation, the language skills, the confidence, the adaptability and the insight that has been the basis of my future career.

From all my travels, experiences all around the world and meeting people who went to various schools, one thing stands out. Edmundians are a special breed and the closeness that we all have for each other is unparalleled. Most people I’ve met are envious of this characteristic in us. Is it because we were a relatively small school, in a relatively small town where everyone knew everyone & their families or it was the Shillong water – who knows? I’m just thankful that I was there!

All the best to all my fellow Edmundians.