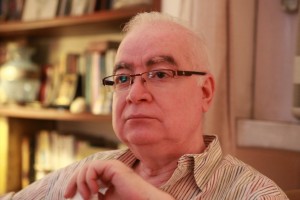 As a writer:
For forty years Jyoti Kumar Sarma has done little else but write. From trainee copywriter to creative director in advertising agencies in Bombay and Delhi, even as manager and then owner of his own advertising agency, the one skill that served him well was writing. However, advertising can be a jealous mistress, keeping one tightly ensnared. Seldom did he get a chance to write what he wanted to write. Blogging on Sulekha.com (iguru.sulekha.com) was one outlet, inconsistently done. Though, he continues to write professionally for a living, he hopes that with the publishing of Cuomo’s Lament (2014) he would have finally written! 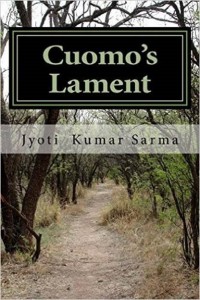 Synopsis of a novel by Jyoti Kumar Sarma.

The hypothesis is that if Nature was a living entity, there would be laws of life that would govern it. There would be birth, maturity and death. If it was ‘living’, it would also have to react to life’s experiences of joy and sorrow with ‘feelings’. How does it face life’s challenges? We present Cuomo as the protagonist from Nature who far from being happy with what seems an ideal life as a free floating cloud in the sky, longs for an altered existence. In an attempt to help Cuomo find its own answers about Life, The Great Rumble, as the Arbitrator of nature’s cycle of life, sends it on a voyage of self discovery. During this journey, it will find itself transported to Earth, a world with a very different set of values and laws. Here Cuomo would face a unique set of circumstances, most of whom would leave it wondering if the altered existence it desired was something that was actually worth longing for.

Into this picture, enters Anna a college student from the nearby hill town who shares with Bamu the ability to converse with Nature. They therefore form a duo who in times to come unite to protect Cuomo as its existence is threatened by rival groups of villagers and townspeople. Through this, Cuomo finds itself in a unique predicament as it discovers emotions of love and affection for the girl Anna. In turn, Anna herself finds attracted to the caring and devoted Professor who is constantly by her side.

How does Cuomo’s search for self identity finally pan out? Does it in the form of Nature ultimately fall to the avarice of Man? Will its’ impossible love story head for doom? How Cuomo fares in this alien world is the subject of this story.

The book is available at

After the first 20 odd pages, the narrative makes a dramatic and vicious shift, affianced initially. A wider cast of characters impinge on the hitherto somnolent journey. A forceful contemporary geopolitical condition envelops a micro conurbation suffering the pangs of coalescing into a semi urban landscape. Vivid are the ‘rent seekers,’ the avaricious bandits masquerading as businessmen and public servants, the diabolical religious fiends, their wily machinations, causing consternation and rage at the injustice of it all.

That is when “Cuomo’s Lament,” arms you, equips you to become sanguine in the knowledge that justice will be done, albeit incorporeal. The author does not indulge with the phantasmagorical and offer vituperative justice to provide a sense of conquest. The retributive justice is permanent and provides closure.

A very interesting read! Not a typical fiction, but a story written to kindle your thoughts n viewpoints on various aspects which the author puts forth. No opinion is given by the author, but a nice story presentation triggers your thought process and you are drawn to make sense or opinion towards various instances of the story. If you are an indian reader you will relate to the story seamlessly and may most probably form your opinion inline with the characters sharing the same beliefs as yours. If you are a non-Indian reader you will be amazed by the diversity of the country’s people and their beliefs. You will in a small book, get a sneak preview of what is it to be in India. A country where blind faith and modern practicality is present in each individual with ambition and greed to prosper.
Read this book, and if you have the requisite bend, you might find some thoughts spiritually connecting, and you may trudge upon the path towards the question for which every one seeks the answer… What is the purpose of our existence?

Links to other reviews:

Author is currently writing a sequel to Cuomo’s Lament, tentatively titled “Sighing for the Skies”. Synopsis on http://www.sighingfortheskies.com/

In the sequel that is now being written, author Jyoti Kumar Sarma takes off from where Cuomo meets its almost foretold destiny. Now, a hundred years later, it lies on a river bed, comatose but with its consciousness still ingrained in the DNA of its fossilized remains. A hundred years of longing later, Cuomo will be awakened by his savior where a new age avatar of the boy-saint, Bamu will now emerge, armed with a device that sees all, monitors all and magically restores man and nature alike. However, to fulfill Cuomo’s longing, his wish to return home to where he once belonged, his home in the clouds, some unique forces must be first battled, tamed and won…
Author is also simultaneously progressing a third book, tentatively titled “Whose Land is it Anyway”

Synopsis: A journalist in a small town, railing at mediocrity in the small town newspaper he works for, gets attracted to a philosophy spouting tea stall woman and then gets embroiled in her battle to secure a separate identity for herself and her people. The story is set against the backdrop of an insurgency movement which tears up people’s lives and breaks up a homeland of multi-ethnic people. The plot traces the protagonist’s travails through kidnappings by insurgents, torture by police, finding love and losing it and ultimately his own questioning of his own identity and the futility of the ceaseless and meaningless fight for self identity among indigenous people. The silent spectator in all this is the Land itself which bemoans the carnage over cartography. It weeps as it has seen it all, a million times over the billions of years that Land has existed.